Warning: Use of undefined constant headerfavicons - assumed 'headerfavicons' (this will throw an Error in a future version of PHP) in /home/customer/www/rebeccamorn.com/public_html/mind/wp-content/plugins/favicons/favicons.php on line 2188
 About Me | A Mind is a Terrible Thing 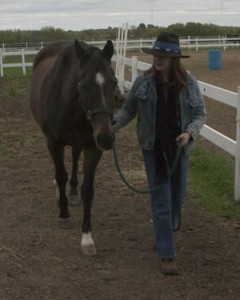 That's Matilda and me in Wisconsin. Mattie belongs to my sister-in-law, Sue.

After growing up in western Pennsylvania, I started a career in technical writing in the mid-80s, but always dreaming of the day when I'd be able to write fiction full-time.
Eventually, I relocated to the eastern half of the state, where I spent the next twelve years, often alternating between salaried positions, contract/temp work, and freelance contracting.  In the evenings, I worked on various stories, including a concept for a lengthy fantasy epic, "Prophecy's Door" (an excerpt from the first completed volume is available here.)  Unfortunately, the writing was marked by fairly lengthy gaps, particularly whenever my life became… complicated.

Eventually, in 1997, I moved to the Santa Cruz mountains—the only other place on this planet that's felt like home to me. Seriously, upon my first visit to the area on a business trip in 1996, the thought flashed unbidden through my brain, I could live here…

In the meantime, from 2000 on, I threw myself headfirst into my newly reestablished technical writing consulting business, Morn Enterprises, LLC.  Made a ton of money, even in the aftermath of the Dot-com bust, but it was at the expense of what eventually became a whole constellation of repetitive stress injuries to my arms and hands during the summer of '03.

After a three month strict regimen of physical therapy and ergonomic retraining, I recovered, and returned almost immediately to a level of effort in the tech writing biz that was only slightly less than before. 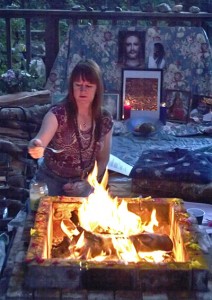 Me doing my thing at a fire homa ceremony

In the meantime, I finished that first novel (under review at DAW at present), started writing two more…and then ran off to India to live at an ashram for three years.  That's another story in itself.