Warning: Use of undefined constant headerfavicons - assumed 'headerfavicons' (this will throw an Error in a future version of PHP) in /home/customer/www/rebeccamorn.com/public_html/mind/wp-content/plugins/favicons/favicons.php on line 2188
 My summer project – finally done | A Mind is a Terrible Thing

Back when we were living in the Santa Cruz mountains of California, one winter there was a horrifically bad wind/rainstorm. Even from the house, we could hear loud crashes from down on our 10 acre plot of mixed oak, madrone, and 2nd-growth redwoods.

It was often my habit to go hiking in those woods and I'd even improved some game trails into decent walking trails. Down at the lower edge of our property, I found what had happened during that storm: A large stand of mature second-growth redwoods had been undermined by water and the wind took them down, one after the other. A giant's pile of pick-up sticks.

We had those downed trees turned into serviceable lumber, decent redwood being not that easy to get. Sold off a lot of it. However, in my scouting, I found something else on our land.

An old-growth log, no doubt from a tree that had gone down at least 20 or 30 years before we bought the place. It looked like it had been hit by lightning, and then fell over. Much of the trunk was rotten and unusable after that long just laying there in the woods. But some of it was still good — and if second growth redwood is expensive these days, old growth is astronomically priced. We had some milled into planks, and some into raw slabs, intending eventually to use them for furniture.

Life intervened, we ended up selling the house and land, and couldn't take all of that lumber with us. But we took a lot of the best, and picked four of the best slabs we could find among the dozen or so we had cut, and stuck them into storage along with rest of our belongings, as we then spent three years in India.

Coming back home, we hauled those heavy slabs from rental house to rental house, and this summer, Stephanie finally goaded me into doing what I'd said I wanted to do all along: Turn one of those slabs into a desk for myself. She'd already built me the simple but very functional fir trestle-style base, but until this past week, all I had on it was this horrible Ikea plastic-laminated table-top. It was sturdy and functional, but the years hadn't been kind and chips were starting to come off it.

Months ago, Stephanie discovered how to build us a slab-leveling device, using boxes and sliders and our router with a special bit. After that, it was in my hands as I figured out how to properly sand this unusual old-growth redwood, now trimmed and shaped. The first thing I had to do was patch the various flaws and insect holes any piece of wood will have. Then came the sanding, first with a belt sander, then an orbital, and finally with wooden block. In places, this type of redwood is soft, but on the grain it's hard, so my initial efforts were very uneven. Eventually I got it mostly sorted out.

Then came experiments with various mixtures of Tung oil, boiled linseed, mineral spirits (for thinning and control), and oil-based polyurethane. The oils were to help bring out the grain color and texture, and to give the wood a small degree of sealing and protection. The poly, however, was necessary to turn it into a durable but attractive desk that wouldn't scratch or gouge easily. In one memorable mistake, I completely screwed up the finish and had to sand it all off to try again. On the plus side, I was able to get the top side to be more evenly flat.

I applied the finish with foam brushes, and the project being what it is, there are visible imperfections. On the other hand, it still looks pretty darned good for my first effort in furniture finishing, and I think the initial Tung/linseed oil treatments did a fantastic job of bringing out the grain highlights, including visible flame-patterns. The most amazing part to me, as I sit here and look at it, is it's a single piece of wood. No laminate, no separate pieces glued together as is common in furniture-making. One giant desktop slab.

Maybe someday I'll take another stab at refinishing it, but that'll only be if/when we get a proper compressor-driven spray system set up at our next place. So — here's a couple pictures. The desk itself is about 72" long and 33" wide, although only the side and front are rectangular; the back is slightly curved in two spots to show off a couple of knots I just didn't have the heart to take out.  You can kind of see them in the photos, but they're not super obvious.

The first picture is just the desktop, to show off the gorgeous redwood grain. The other shows my computer set-up. The photo credit, by the way, for the graphic being shown on my dual-screen rig is by Ryan Bliss, of DigitalBlasphemy.com. I simply cannot recommend his work highly enough. 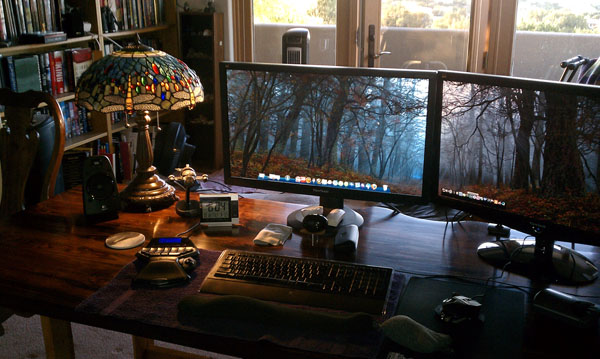 Owner and proprietor of this here establishment
View all posts by Becca →
This entry was posted in Just stuff, Life in New Mexico. Bookmark the permalink.